win an autographed copy of Andy Griffiths' The 13-Storey TreeHouse

Greetings all,
Last weekend, tightly squeezed in between parties, i attended a book signing & presentation by Andy Griffiths - one of Australia's BEST loved & highest selling children's authors - at the National Library of Australia.  It was packed with over 300 children clutching stacks of his books, the atmosphere was electric & i was thrilled to be in his presence.
Naturally my son had left his Andy books at school so we purchased some new books (ok, nine new books) & bless Andy, he signed every single one!!  Including an extra book i purchased to giveaway on my blog.  I told Andy i was doing this (giveaway) & he stopped, looked up & asked if i was a writer, did i run a children's literacy blog - he was so engaging, interested in who i was & what i was doing - i was thoroughly impressed.  This man is as energetic & fun as his books. 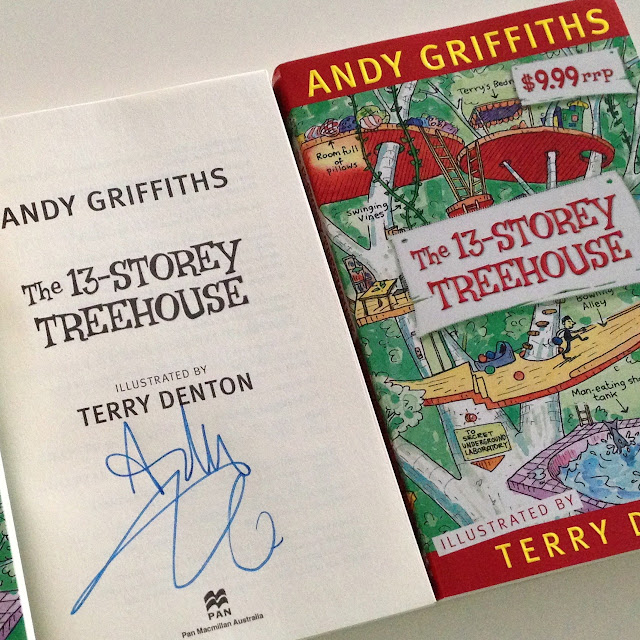 I hung out with my gal pal author Tania McCartney who had hosted a book awards events the day before with Andy, she said he was fantastic.  With the overflowing crowds, Andy started the event an hour early, to autographed books so no one missed out.  Truly an author who appreciates his audience!! 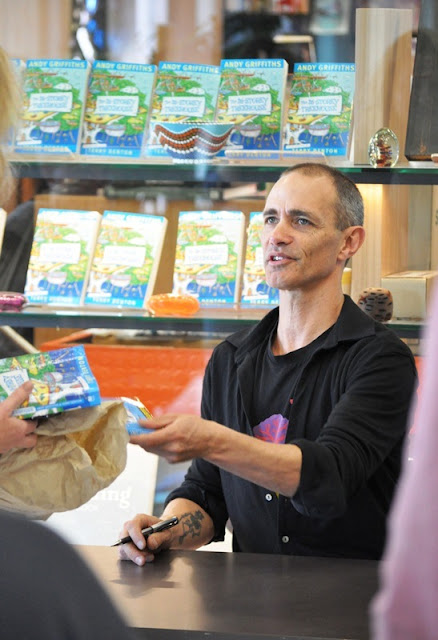 I've stolen these images from Tania (thanks) as my images were dark.
Andy gave a fabulous presentation, but truly, he was more interested in questions from the audience & bantering.  He made everyone feel special & his brain goes a million miles an hour, he's absolutely hilarious & spilled the beans on his next instalment in the 13-Storey series (it will involve a chocolate fountain!!) 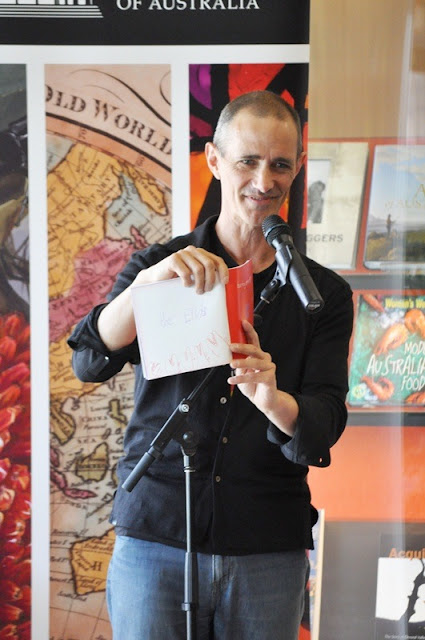 Andy writes like a naughty school boy, it's so entertaining & captures that difficult demographic of fidgety boys who can't sit still.  While he was chatting, there were boys reading everywhere - the Library provided seats & cushions - it was brilliantly organised.
After he finished, he went back to signing books, the queue was loooong & the Library staff brought around badges, book marks, balloons & chocolate frogs.  My boy continued to read, then bounced a balloon around, made some new friends & back to reading.  While at the signing table, Andy chatted away to my son, which books he liked the most, he treated us like we were first in the queue, when we were easily the 200th!!  Gosh he must have signed thousands of books. 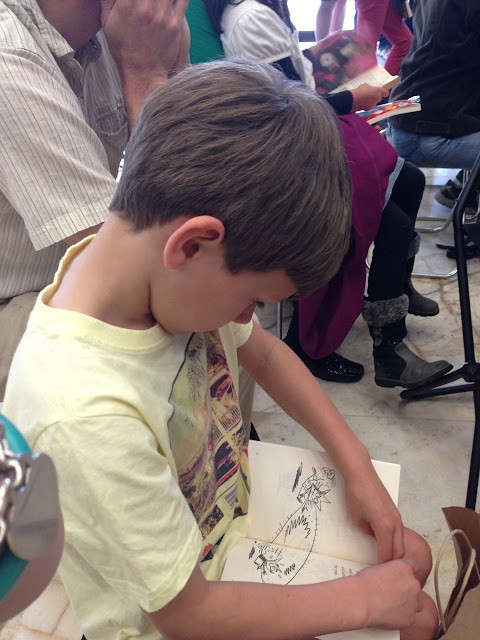 My son spent the rest of the weekend with his head stuck in Andy's books.  He has the 13-Storey & 26-Storey TreeHouse books now, the series will continue to expand.  So i thought i'd start someone's collection off with . . .
an autographed copy of Andy Griffiths' 13-Storey TreeHouse
. . . in a blog giveaway.
Just leave a comment here & follow this blog (on the right) for your chance to win.  Entries close after midnight Sunday 9th December, just in time for someone's Christmas stocking!!  Good luck, random draw & as always + extra entries per mention on your Blog, Twitter, Instagram, FaceBook.  Love Posie

Hi Lovely!
You'd better count me in :)
Both my kids are fans of his books and have a couple but not this one.
I love that he was so into talking to everyone! It makes you like someone more when they're friendly like that.
Rach x

Ah, don't count me in as my son has the first book and Santa is apparently bring him the second- but he loves Andy's books. I wish Andy would come and visit here. My sons would be bouncing off walls!

I would love to win a copy of this book for my grandsons. Sharyn

I just love that ability in a person to make you feel like you are first in the queue a rare and gorgeous skill. I haven't come across him before but with 2 boys I am excited to read some of his work. Would love to enter if you are happy to post to NZ?

Sounds like Andy is a great author and person :) Would love to start a collection of his books :)

my big girl LOVES his books and cant get enough of them. We have seen Sally Rippen speak but oh to see Andy Griffiths would be icing on the cake I wonder if hes ever planning on being up our way. She doesnt have this book but would love it. Follow already. Thanks

my big girl LOVES his books and cant get enough of them. We have seen Sally Rippen speak but oh to see Andy Griffiths would be icing on the cake I wonder if hes ever planning on being up our way. She doesnt have this book but would love it. Follow already. Thanks

Wasn't it fun fun fun!? Andy is so generous and so engaging with kids (and adults) - he's a delight.

A friend in the States went to a 'meet and greet and throw questions at me' session at a bookstore with Jeffy Kinney (author of Diary of a Wimpy Kid). They had 15 mins before the masses of kids came through the door. She filmed the entire thing and I swear to God, he had not two seconds to give anyone. All he did was sign books in rapid-fire succession as book-handlers thrust them at him. He could barely focus on the 'interviewers' around him and there was no chatting with kids other than a few really disingenuous, generic questions and answers with my friend's daughter who stood in awe in front of the table.

Andy, on the other hand, is efficient but also greets each child, signs, chats with them, does a little drawing and makes them feel special.

I don't care how many books you have to get signed, give me Andy over Jeff any day.

I am trying to instil my love of reading in my 6yo. He is nearly finished Kindergarten and is reading at a yr 2 level. But, he doesn't enjoy reading! Maybe its the books he reads? Maybe a children's book that is funny and well written would help him to find the same joy that I find in the written word? Would love to win this for him.
Thanks
Nat

Thanks for another generous giveaway! My 9 year old has and loves the 26-Storey book, but hasn't read the 13-Storey TreeHouse so a signed copy would make his day :-)

You are the giveaway Queen my friend. Please count me in - his books are awesome! Mel x

My youngest son loves Andys books and this is such a generous giveaway.Please count me in and yes, I'm following you.xx

My youngest son loves Andys books and this is such a generous giveaway.Please count me in and yes, I'm following you.xx

Di from Max The Unicorn said...

I'd love to enter for my son who would absolutely love this book! Following as Di from Max The Unicorn :)

Awesome, love to win it for my little one, he's gonna love it :)

This book looks interesting...even for me, an adult!

These books are on the Christmas lists wining would be wonderfu

What a fantastic prize! My kids would love this!

Another wonderful giveaway! I have been catching up on my blog reading and couldn't resist entering this competition, my nine year old son would love it! cheers, Lil x

My son is not a very keen reader...but when it comes to Andy Griffiths books I cant stop him! He is an amazing author who knows what young boys want!

My daughter loves his books and would be thrilled to own this book!
operationhotmother@hellokitty.com

I would love to win this for when my son gets older so that I can read it to him.