Greetings all,
Every 100 followers i do a get-to-know-me post . . . this time i'm scratching up things i do believe i've never mentioned on my blog before.  Most are in line with my accident prone & self effacing nature, i can be serious but that's just not as much fun!!
I was the lead actress in a friend's University final assignment - she directed a movie masterpiece based on a romance over coffee - for her communications degree.  I couldn't keep a straight face or remember my lines.  I don't even drink coffee & looking longingly at a guy i just met, over a steaming brew . . . impossible.  My on screen lover had this awful wig on & his facial expressions . . . oh dear, there was a lot of 'cut' while i composed myself.  I also did the voice overs in a sound studio, think: breathy.  Somehow the movie was edited into a winning piece of 'cinema' & my darling friend got her degree, went overseas to a flourishing career with Andrew Lloyd Webber.
I've never made a photo worthy macaroon.  Tastey but ugly.
When my son was a toddler, i lost him in the house.  I eventually found him naked, on the trampoline in the front garden, sound asleep.  I took a photo for his 21st birthday!!
I actually wet my pants on a date.  My boyfriend didn't believe i was really that busting & fiddled around with my house keys . . . i burst into tears as i wet my pants on my parent's door step.  He still married me.
In my final year of school, my mother ran me over in her car, outside the train station.
I'm a total green thumb, yet over-love succulents & kill them.  En masse.  Massacre.
I broke my nose as a child by swimming into the pool wall really fast, nose first.
I'm allergic to bees.  I've been stung several times & swell severely around the bite.  We had bee laden wisteria all around our pool area.  My parents never thought to cut it down, just treat my stings!!
My first car was a Ford Laser, a bubbly blue hatch back, i bought from my brother.  I loved her until the day she was stolen.  I replaced her with a Ford Laser, an older version white 5 door, i bought from my sister-in-law.  We traded her in when we were pregnant with twins, for a Ford Falcon.  My husband had a Ford Falcon before we bought the Toyota Landcruiser (when we got married & still have 15 years later.)  There was also a Mitsubishi Mirage & Jeep Cherokee in the mix, before we bought our first-ever-brand-new-shiney car this year.  She's magnificent & will be with us for at least a decade.  Long range diesel people mover, we're all set for the farm commute.  The next car we purchase will be for our eldest daughter in a few years, eeeep.  Ford maybe?? 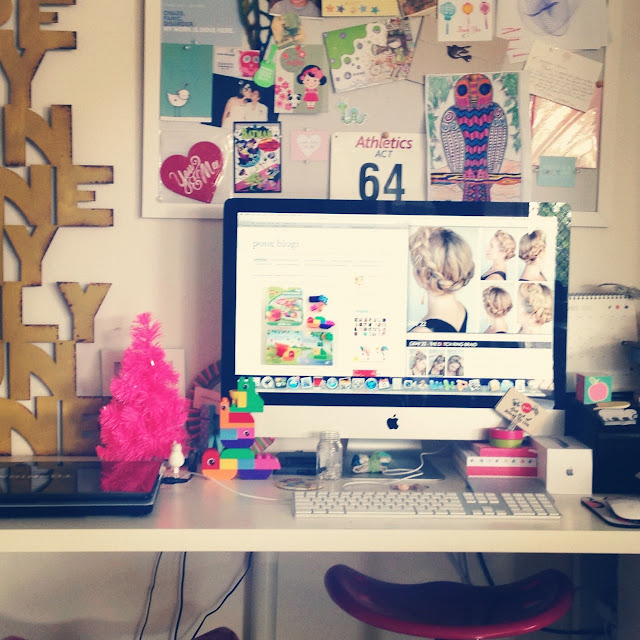 Finally, this is where my blogging happens . . . my first desk top computer since last millennium.  I have a habit of breaking laptops (burning out the engines) so i figured, i don't need a portable computer anyway, i'll go big screen Mac & i love it.
Thanks for following, love Posie

Lol.. This was great to read Posie! You're mother ran you over??!! Was it on purpose ;)

this is gold! thanks for sharing :) nice blogging space too :)

What?! She ran over you?! I am thinking there is more to this story!

I LOVE this! You have inspired me to do a similar post. So lovely to learn these quirky little (and sometimes BIG!) things about people.

You've certainly had an amazing life, Miss Posie - with even more of the best yet to come.

so many things to comment on. Love it all, and your little writing space is great. Downsizing in a few weeks to a 3bedder so lose my office so I am wondering if this space is in your main house and if so any tips to make it work? So spoiled and used to a room that I can shut the door on all my mess or go in and take a phone call quietly if I need to its gonna be quite an adjustment for me I think. And a big cull on the way as the office not only has a dining table for my desk but also 2 4 drawer filing cabinets and 2 book/craft shelves. So all this will need to be rehomed oh dear

hahah! couldn't stop giggling! I knew you were all sorts of adorable but this confirms it! I am a clutz and accident prone also, and have pee'd my pants (or skirt) at work...! Congrats on the 800 and my first car was a gorgeous ford too till my brother crashed it!

much love B xx

Wonderful post - I think you need to expand on the part about your mum running you over.........please!

Congrats! 800 is HUGE!! Loved reading all these snippets. Hilarious. There needs to be more info on the running over incident though. For some weird reason I just love seeing where people Blog from so thanks for that last snap :-) Me; xx

I swam into a pool also, knocked my two front teeth out - luckily they were my baby teeth! Loved learning more...

My first car was a cream bubble ford laser and it was stolen when I was at uni then at my first job I bought a brand new sedan ford laser! Upgraded a few times since but thought our first car story very similar and I think we are the same age! I'm one of your instagram friends!!

I'm jealous of your green thumb!

You're hilarious (and brave) but I knew that already. ;)