The Lost Diggers of Vignacourt

Greetings all,
On Sunday, we went to the much anticipated The Lost Diggers of Vignacourt exhibition at the Australian War Memorial.  We were thoroughly impressed with the incredible images - taken by Louis & Antoinette Thuillier - of Australian soldiers during WWI in France.
The images were rediscovered last year, on silver gelatin negatives entombed in an attic trunk, in Vignacourt France.  They were about to be tossed out .  Luckily their historical value was realised & they were acquired by Kerry Stokes (head of Australia's Channel 7 & a keen war artefact collector.)  Each negative was carefully printed via the original method, framed & donated to the Australian War Memorial. 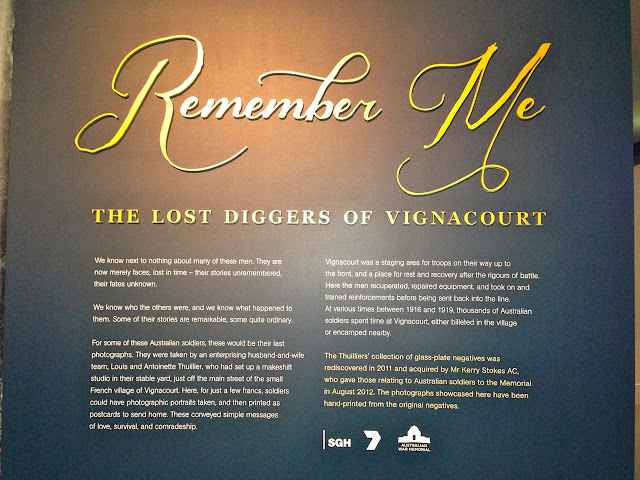 There are almost 100 photographs on display, mainly Australian soldiers, however, French, American, English, French & Gurkhas are included + some of the 100 000 Chinese who worked making uniforms & equipment for the front line allied troops.  I had no idea!! 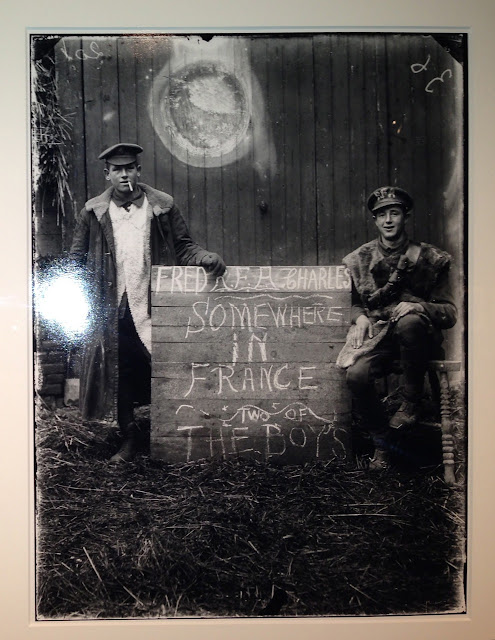 These are examples of the original photographs & soldiers would have carried them as keep sakes.  It's a quaint farm village where many of the French girls married soldiers during the war too.  Some of the lucky troops who survived the Western Front, stayed in France to raise families. 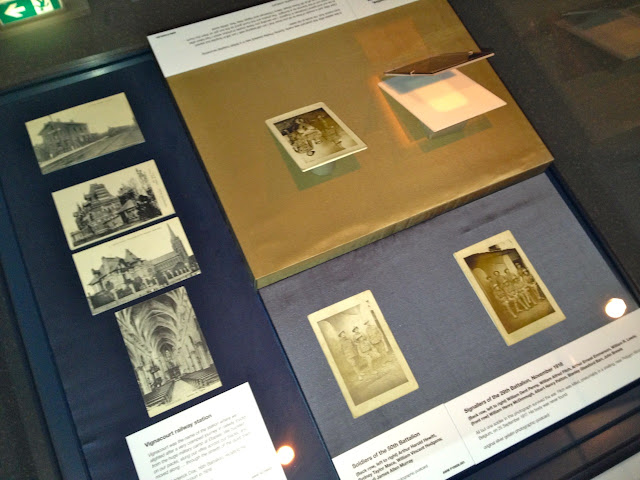 There are fantastic descriptions with each photo, where they have painstakingly worked out who is in the image or what they are doing.  Here is a young Australian doctor with an Army chaplain, both survived the war. 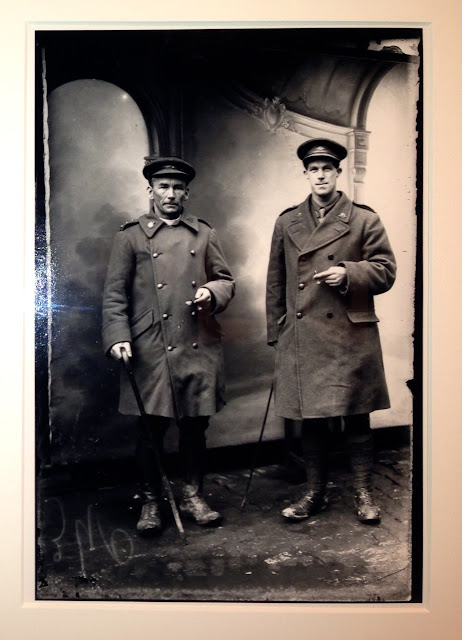 This is an Australian soldier playing dress ups in a German uniform. 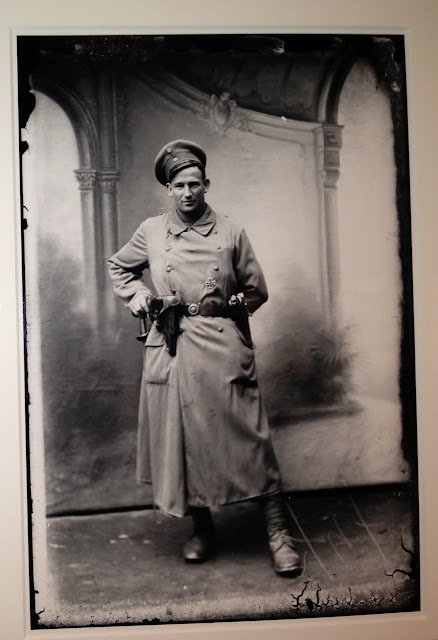 This is a heart breaking account of one woman's family sacrifice for war . . . in 1947, aged 74, she donated her eldest son's uniform & records from WWI - he was killed at Villers-Bretonneux.  The boots still had mud from the fields he fought in.  She was a young widow when her two sons went off to WWI.  Her other son was killed in Gallipoli.

Can you imagine the incredibly lonely life she had, without her husband or sons, how do you recover from that?? 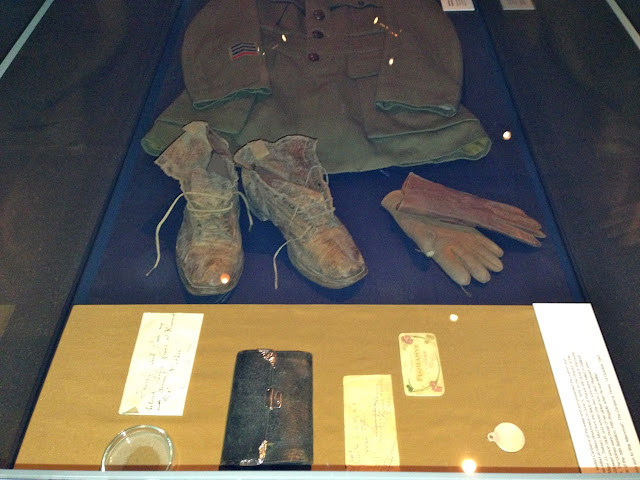 This is the photo on the way out of the exhibition.  I mentioned to my husband how these soldiers looked like boys . . . he said "you should see how young the soldiers sent to Afghanistan are."  Just brings tears to your eyes. 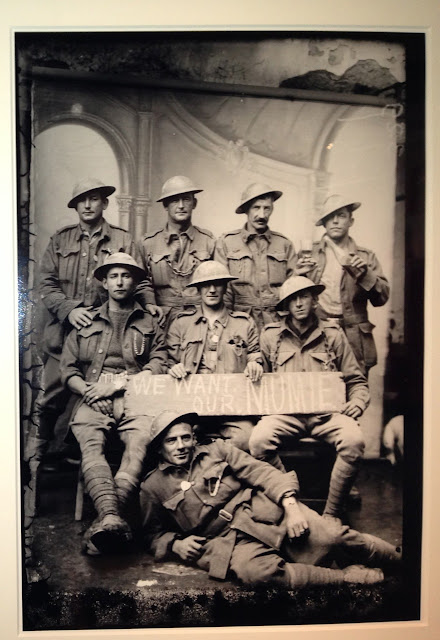 Finally, the incredible chest where all these negatives & photos were hiding for almost a century. 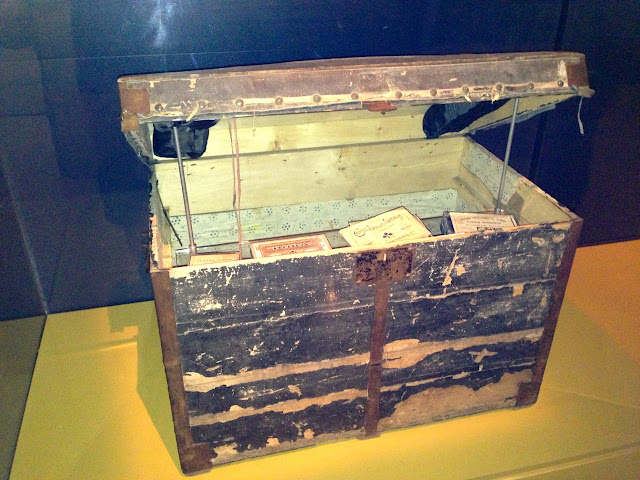 You really must visit these amazing photos & trip down to Canberra, it's the most amazing record of a very different side to WWI - battle weary soldiers taking some time off between battles.  Love Posie
EDIT: we spent our honeymoon travelling all over Europe, however, the week we spent in the north of France, visiting all the cemeteries & battle sites, with my new husband - a handsome soldier - i cried every day.  The respect for Australians is incredible, the sprigs of wattle, flags, kangaroo toys & immaculate memorials . . . head stones & lawn cemeteries shows exactly how much the French appreciate the Australian effort.  Many towns up in the Somme (Ypres, Villers-Brettoneux) celebrate Australia Day each year too.  I'm sure there are many Australian descendants there too.

I was flicking through a book of some of these images with my husband in a bookshop recently and tears were seeping out of my eyes...even typing this brings a frisson of sadness. 18 months ago I went to Ypres, The Menin Gate and the Western Front and toured battlefields and war cemeteries.....it was indescribable and I can't begin to imagine what it must have been like. Such incredible sacrifice. At The Menin Gate they still play the last post every night with gratitude, when we told them we were Australian they shook our hand. Lest we forget. Rx

And this is why I love Canberra! What a treat to have all that history right there. And no, I can't fathom how life would be for that mother or any of the thousands who lose family members to war. Mel x

Those mums lose their sons in war but keep the freedom of nations. They are so brave. It's so good to see them having some down time and being able to relax a little in the midst of everything...such a valuable collection especially for the families of these men.

A Spoonful Of Sugar said...

What a moving collection. Hope it comes to the other states after Canberra. My Grandfather fought at the Western Front in WWI. We will be in Villers Bretonneux next ANZAC Day to honour him.

I'm hoping that we will have the opportunity to visit Canberra soon with the children to see the War Memorial (and other sights). My husband comes from an 'army' family and I understand your 'gentle steering' of your son away from the same. I drop many subtle hints to mine that I don't think it would be the life for him. Have really enjoyed looking through your recent posts, will be back for more!

You got me crying again. How many mothers during that war had lost it all and wars since. Amazing photos and how wonderful that they have been saved.

I am et to take the kids to the war memorial. It is on the list of things to do.
Us Army wives are amazing. But a mother of a soldier is too. How heart breaking for that poor mother.
Tim's Great Grandfather meet and married the love of his life while injured in WW1. She took him home to Ireland they married and he returned to Australia 5 years later with Tim's grandfather.

Another beautiful, thoughtful post. I also can't imagine what it would be like to let a son go to war - the mothers who do this are saints. Absolute saints. xx

Posie, these pics are such lil moments in time. I love the signs! Heartbreaking. Be great to see, my boys would think these pics are amazing. Thanks for sharing with us!
Rach