Greetings all,
Feeling groovy with Olympic fever??  My primary schoolers took my Olympic Relay Torch to school & now students keep asking me which events i was in at the Olympics.  I wish!! 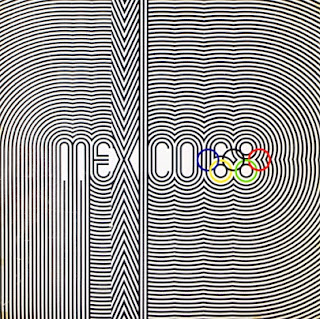 Olympic poster of the day: Mexico City Mexico 1968.
Olympic Scandal: the 'Black Power Salute' at the medal ceremony for the Men's 200m where Tommie Smith & John Carlos (both USA, gold & bronze medalists respectively) each raised a black gloved fist as a "human rights salute."  Australian Peter Norman won the silver & wore an Olympic Project for Human Rights badge.  All 3 were suspended from the games by IOC President Avery Brundage.  Sorry, where were then US Olympic Committee President Brundage's 'apolitical salute standards' during the 1936 Berlin Olympics??  He made no objections to the Nazi salute on the dais 'as it was a national salute' - disgusting!!  Brundage, a Nazi sympathiser - double disgusting!!  Hitler, Germany's Chancellor - triple disgusting!!  Anyway, both Smith & Carlos kept in touch with Norman & were pallbearers at his funeral in 2006.
Found this sweet photo of our twins from their Mt Kosciuszko hike on the notice board at school (girl on right in borrowed track pants!!)  My third girl received an A+++ for her Olympic project, with thanks to some free TinyMe printables linked off Tania McCartney's blog (so my daughter wrote her a thank you note & handmade a felt heart, too cute!!)  We have the Medal Tally on the fridge for Australia & one for Spain (son's homework assignment.)  Did you hear Usain Bolt learnt Spanish as most of the 'hot athletes' only speak Spanish??  What a charmer. 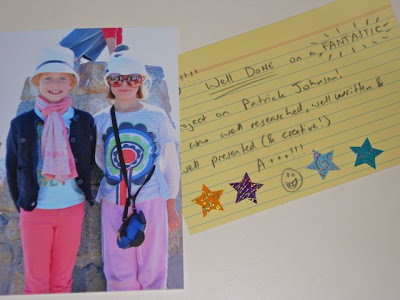 Because i'm an over sharer & gasp when i see colourful things i adore, i whipped out my copy of Mollie Makes magazine to show the manager at Seed, the friendship bracelets on the front cover . . . they have similar ones in store!!  I went back the following day to get a dozen more as they make great gifts (we're going into the birthday months remember) i spent many a Christmas pregnant, not making babies!! 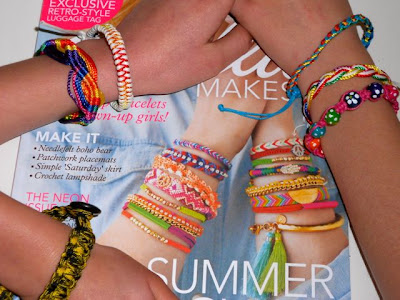 A gold medal for my number 1 son!!  His 'bracelet' in the image above is from Afghanistan, he likes to join in.  Yes, he maintains his supreme olive skin colouring all through Winter, the Italian genes run deep. 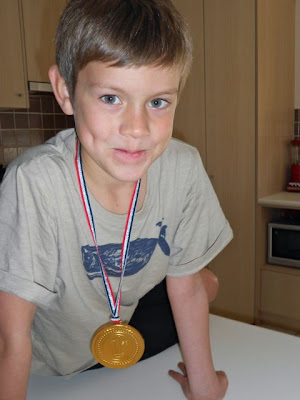 The chocolate gold medal didn't last long, bless his heart, she shared it with his 3 sisters. 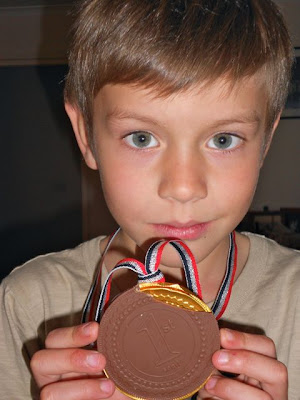 Don't forget the Limp Bits challenge starts tomorrow - get ready to link up your cooking entry - bake, cook, roast, sauté, BBQ, grill, smoke, poach . . . something you've never tried before or haven't for a while.  Details here.

thanks for sharing such an awsome blog.......

I'm sorry I have really never been into the summer olympics.....I know, shame on me.....love your sweethearts smile!

Thank you for publishing this information online.
My web site - Cheap Maternity Clothes

all stylish images are really wonderful.

We absolutely love your blog and find most of your post's to be what precisely I'm looking for.
can you offer guest writers to write content in your case?
I wouldn't mind writing a post or elaborating on many of the subjects you write with regards to here. Again, awesome web log!
Also visit my web page - Living in Spain

I've learn several good stuff here. Certainly price bookmarking for revisiting. I wonder how a lot attempt you place to create any such great informative website.
Take a look at my blog post :: forexbroker.info