a week of Olympic proportions & flash back to Seoul 1988

Greetings all,
I often use 'Olympic' as a huge-prolific-amazeballs adjective . . . we had one of those Olympic weeks: children thrilled to be back at school with their friends; successful parent/ teacher interviews; my eldest is in a new Volleyball team in a higher grade; dinner out; my husband started work locally; even the chickens are laying more eggs since the Winter Solstice!!  I wrapped up the week with a clean house; read a few magazines; wrote thank you notes; lots of exercise; cooking new recipes; tending to animals; somehow became the marketing manager for our school fete + consulting with Jan-Maree of Aussie Hero Quilts about her trip to Canberra next week (including a sewing Saturday at Duntroon) 415 patchwork quilts have been sent to our troops overseas already!! 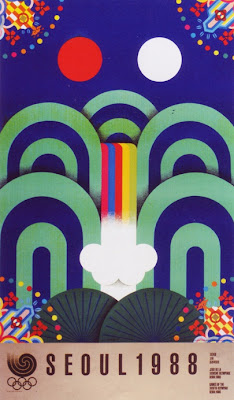 Olympic Poster of the Day: Seoul South Korea in 1988.
Olympic Scandal: attention London Olympic organisers, there are two very different Koreas,   perhaps you might like to check the flags (at the North Korean Women's soccer) as they are separate countries.  'Peace & good will' at Olympics = don't upset the North Koreans!!
Then a Friday treat - brunch with Tania McCartney.  While we gobbled down panini, exchanged 'just because' gifts & chattered a million miles a minute, we hit our favourite haunts - Typo, Seed, Pepe's Paperie, Laura Ashley - then Tania dashed to meet some authors for lunch (socialite) i had time to kill at Kikki-K, Fossil & Witchery.  Lots of sales, the sequin & tulle skirts cost me less than $40 (total value $150) for my eldest to wear to discos, socials, parties - baby steps, she's not a girlie girl - so the sequins were met with a screwed up nose, however, amazing what you're teenagers will do when you pay the entry fee &/ or drive them to said discos, socials & parties!!  Plus i met her after a volleyball clinic with sushi, she loves me!!  Actually Tania sighed her daughter wasn't frilly either, would live in jodhpurs if she could, alas, i have two extra frill-sparkle-sequin loving daughters to dress & hand these down to. 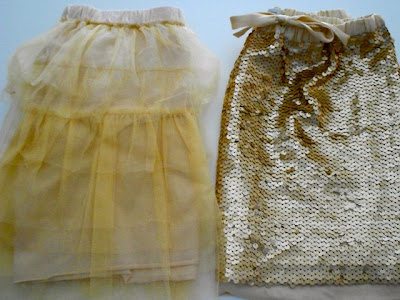 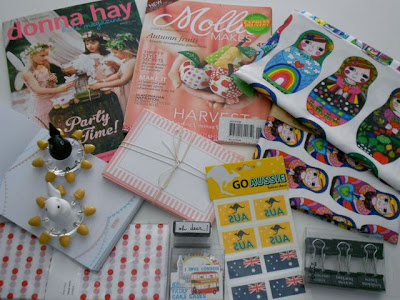 I was up at 5.30a.m. to catch the Opening Ceremony of the London Olympics, thrilled to find two of my girls already up watching, had to wake the rest.  The athletes parade - Italians, chic as ever; Australian team uniforms matched the French, only with bottle green jackets - we looked very smart (for once!!)  Very excited to see Patty Mills (a Canberra born & bred Basketball player) out there.  Then the Americans came out, oh Ralph Lauren, berets off to your classic style!!  We particularly enjoyed the Pacific Island & African nations with their glorious national uniforms.  Actually, i would have put the French in cravats or scarves (the ties were a bit bland) like my new red, white & blue Witchery birdie scarf!!  How i'd love to dress an Olympic team. 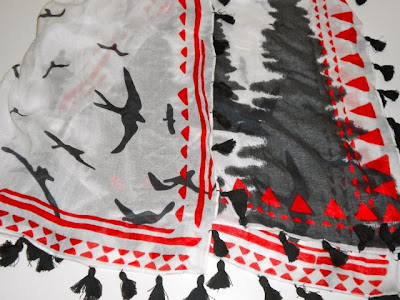 Now i don't have pay television & am suffering Eddie McGuire.  We picked up various faults in Eddie's opening commentary, including . . . this was the first Olympics where every team has both male & female participants (not quite) . . . & how ANZACs fell alongside British troops during the first few days of the battle of the Somme, France in WWI (no Eddie, they hadn't arrived yet!!)  Who researches this stuff & worse . . . who lets Eddie on television??  Just let Andrew Gaze do all the talking please (5 x Olympics, Sydney Olympic flag bearer, son of Olympian) as he actually knows how it feels unlike over paid, non athletic, television executives!!  What did you think of the Opening Ceremony??  I loved Daniel Craig with the Queen (corny but forever-hunky-in-a-suit); David Beckham looked pretty pleased with himself captaining that boat; the music was ace, although Paul McCartney was a bit off key; the cauldron was AMAZING!!  I didn't realise the British were such fans of the National Health System??  All my English relatives complain about it!!

Oh my goodness, I need me some girls! Those skirts are just adorable! I can so see all of your girls in them in time. And that babushka fabric has lots of possibilities and I suspect completely you! I missed the morning viewing as grocery shopping took precedence but I settled in at the cutting table and produced laundry bag kits during the re-run this afternoon. Groan to Eddie McGuire – wish he would stick to sports. Hubby and son came in to watch a replay of the queen jumping out of the helo but were not impressed with my “hubba hubba” at the sight of Daniel Craig in a tux! Sigh! I agree Sir Paul was not at his best but I did appreciate the fact that the English picked home grown talent and didn’t import big overseas acts like Australia often seems to! Love the opening ceremonies – so amazing and just think – to take one from concept to completion must be such an amazing journey! Love JMxx

Agree agree agree! Like moths to a flame we are all on the couch to watch athletic history in the making...Hot chocolates coming up!
It was Eddies "Sarah Moanie" that did me in. He requires elocution lessons.

You have uploaded an awesome site.
My web page ... wedding stylist melbourne

Not having to pay when you go to the doctor or hospital? Not having to weigh up health concerns against contents of bank account? You bet those of us living here love the NHS.

I can't seem to pull myself away from the tv when the Olympics are on. Agree about Eddie, he is just awful and needs to keep his mouth shut at all times.

If you desire to increase your experience only keep visiting this site and be updated with the
latest gossip posted here.
My blog post This is the best way to lose weight

My sis instructed me about your web site and the way great it is. She's right, I am actually impressed with the writing and slick design. It appears to me you're simply scratching the floor in terms of what you may accomplish, however you're off to an ideal begin!

Hi there just wanted to give you a brief heads up and let you know a few of the pictures aren't loading correctly. I'm not sure why but I think its a linking issue. I've tried it in two different browsers and both show the same results.