Greetings all,
Many thanks for the heart warming comments yesterday, i finally heard from my husband last night, he couldn't say much other than he's Ok (physically).  I can not imagine the horror of being machine gunned by a soldier you are training to help protect his country, on your own base.  It has happened before to British & American troops, it's my greatest fear for my husband who doesn't patrol outside the wire as often as he used to.  War is war.  I went to the doctor this morning to start my carpal tunnel surgery journey - the lady ahead of me, hysterical, her nephew was one of the soldiers killed.  I felt like crying through my whole appointment, being painfully poked & prodded aside.
Halloween is not widely celebrated here in Australia but we enjoy a pagan festival.  My late mother-in-law was born on Halloween, but i can't say she was a witch, far from it, never heard her say an ill word about anyone. 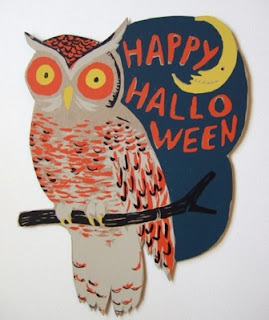 The owl image above is borrowed from The Polka Dot Petticoat blog in Alaska, thanks Heidi.  I blew a few dollars on some treats, including these 3 new ceramic bowls from the 'imperfect' table at Bison. 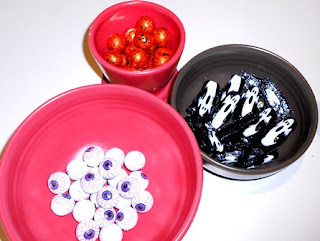 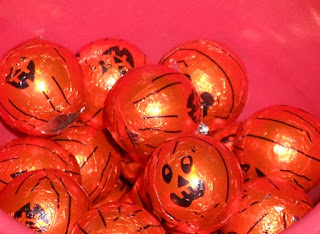 Saturday night, these two maniacs went to a Halloween disco, as a witch & a rag doll. 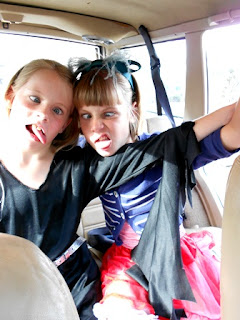 This patient boy ran around the car park before the party started, for an hour!! 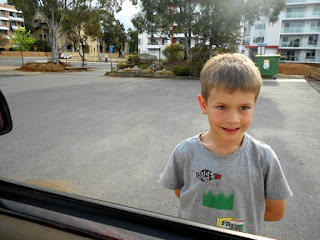 We were early as we had to buy new Nike waffles (like spikes) before the store closed at 5p.m.  She's trying to drown out the singing from the hyped up twin sisters. 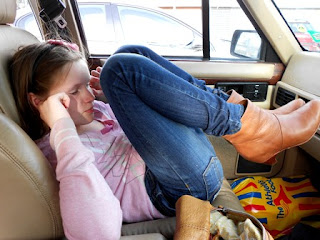 A basic pre-party snack . . . everything looks better served with flowers. 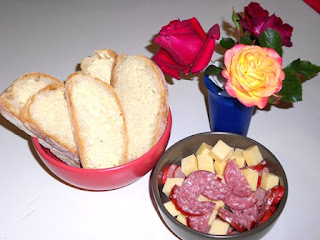 Saturday was wet, athletics cancelled, but it ended with a rainbow. 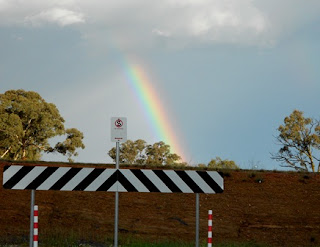 Enjoy Halloween if it's your thing.  Tomorrow i'm going to stock up on spooky goodies in the sales as my eldest would like a Friday the 13th Party next year, love Posie﻿

it is such a shame that we don't really do halloween here - hopefully we will in the future as it is such fun for the kids and the adults - it used to be lovely when we lived in the States, all the neighbourhood out and about together - very friendly and family oriented. Hope your girls enjoyed the party. Good luck with your bargain shopping. At least halloween is a good distraction at the moment.

Glad your husband is OK. What a relief. Cx

Hey, I didn't know Halloween is not celebrated there. Will try to post something because Halloween is quite big where I'm from ;-)

Was thinking about you yesterday. Glad everything for your family is good. Those poor other families. Hope the carpel tunnel stuff is all going ok. xx

I can only imagine how much grief must be must be felt by the Aussie soldiers at the moment, not to mention the families of those killed. I am so glad though that the news is good from your man. All the best with your wrists and the surgery to come.

I'm so glad to read that your husband is ok. What a big relief for you. I hope your carpal tunnel improves soon - I have had wrist problems since I worked in a call centre many years ago, so I know how painful it can be.

oh honey, just read your previous post - i can't imagine how you do what you do. my thoughts are with you....and on the other hand...great distraction with halloween to celebrate...looks great!!!

Good news about your husband....
All the best with the surgery journey. Here's hoping it is all done in good time and great results for you.

I actually thought of you when I heard the sad news about the soldiers. It's been said they're from Lavarack Barracks here so I'm sure their names will be made public fast. Hope all goes well for you and your family though.

Question; In Google Reader I can just see some sentences and no pics when you post - have do I get that? Don´t know what kind of settings to look for.

So glad that your husband is fine, but what a shock. Hope things will soon be better with your hands too. Have a great halloween! It is such a fun festivity (even though it's all ghosts and witches... am I the only one who finds that funny/weird?) :)) Kx

I was so sorry to hear the latest news from Afghanistan but I am glad that your hubby is safe, Jen.

Bugger on those wrists, though. Hope that it gets sorted soon.

I'm glad you got to hear your man's voice at last and hope it was just what you needed.
:-)

You have uploaded a fantastic site.
Also visit my homepage : couples counselling melbourne