Greetings all,
Our brush with President Obama is over.  We were a 28 hour pit stop between APEC in Hawaii & East Asia Summit in Bali.  So literally, blink & you'd miss him. 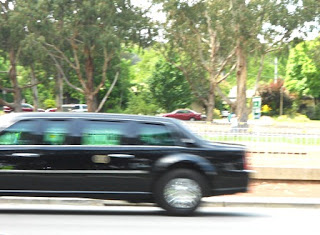 We saw the motorcade on the way to school, a blur of speeding cars.  So i did some shopping in the city, then i thought i'd stake out the school President Obama was secretly obviously visiting, due to the media & police presence. 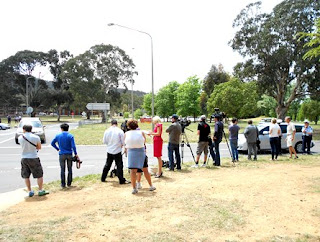 This reporter was so lovely, some sweet grandparents next to me posed for photos with her.  She was even using hair spray prior to the live cross for when the motorcade came whizzing past.  Ooppss, she was sneezing. 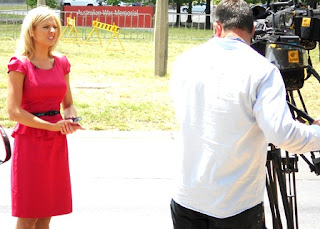 Lucky Campbell High School year 9 & 10 journalism students met with him in the library.  The Federal Police were so funny on ANZAC Parade, chatting to the crowd, sitting on the curb, leaning on the fences, sending SMS on their phones & swinging their arms to stay alert - they are so NOT the Army!!  The funniest thing i saw was a Kia Carnival filled with Secret Service - seriously, a Kia Carnival, they looked like a school mum in a rush.  Ever heard of a Kia Carnival in a high speed chase or rocking up to stop a riot?? 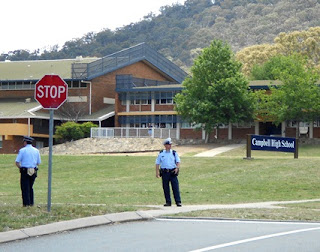 Then the motorcade starts up again . . . 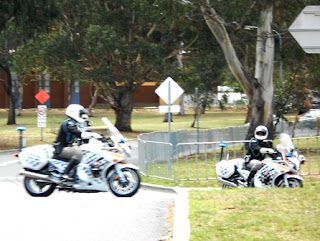 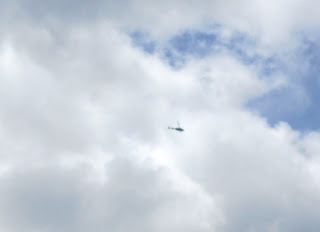 & there goes the President, again.  He so totally waved at me!! 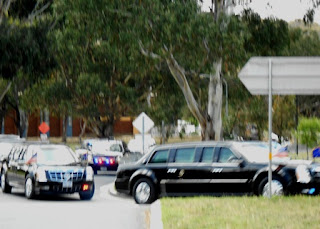 Off he went to Darwin & landed at the Air Force Base we used to live on.  I don't miss aviation gasoline on my washing!!  They're expanding the Army Barracks to include thousands of US Marines, yay, we still have property up in Darwin, so house prices will rise.  The ratio of men:women in the Northern Territory is 5:1, now ladies have hunky Marines in the mix.  Have you noticed that everyone in Darwin is thrilled about the base??  It's going to bring so much money to that beautiful tropical city!!  We'll sell our property so we can build a home but we'd love to have held onto it, so our children can visit their home town in the future.  Love Posie

I sure hope you waved back. What a fun day! Certainly something to remember and tell the grandkids about and a good post for someone special to read before bedtime - not your usual day!

Poor Kia Grand Carnival getting another bad rap, love it! I hope our Carnival does a better job at towing our caravan around the country than it does trying to play serious security vehicle :-)

That is so funny.

I am so glad you staked him out. Some cool whooshy photos too :)

wow such a hub bub......I went to Anchorage with a friend yesterday in 50 mile an hour winds with trees down and below zero temps......I kept thinking were crazy but oh the fun we had I think were tough when it means getting to the big city for a fun day of shopping and great food......and a check out day for mom!
Hows your wrist doing are you on pain killers I hope to manage that?

The Queen, Obama? whoever next???
love how he waved AT YOU...fee x

As ever I so enjoy your 'take' on these events.

Was thinking about you when I heard about the increased US presence in the NT and wondered if it would have any flow on effects for you.

Thanks for the major giggle over this post! Great fun. My kids ranted and raved about all those F18 jets screaming around the skies. Talk about hoo-ha (although, major power crush here - would have LOVED to meet him).