i'm grateful for . . . 'breathing the same air as the Queen'

Greetings all,
Ok i'm dragging out my brush with Her Majesty The Queen . . . she's still on our shores Australia, soak it up 'subjects'.  After such a fantastic response to my 'Going to Canberra to visit the Queen' photo post earlier in the week . . . here are the details.  I'm so very humbled & grateful for the experience of breathing the same air as the Queen!!
If i knew it would be SO easy to be THAT close to the Queen, i would have run to the florist, dragged my children out of school & twins off camp . . . to hand Her Majesty flowers!!  I was in tears & speechless just being there . . . imagine if my children conversed with her??  I was completely incoherent when i rang my father to tell him.  He has met & dined with our wonderful Queen several times, as lucky naval commanders do.  I know my Mummy doesn't know who the Queen is anymore (Alzheimer's) i still wished she was with me.  The Federal Police were excellent & very entertaining while gathering the children with flowers to meet the Queen.  Just like that - no nominations, ballots, screening or invitation-only-guest lists . . . you've got flowers, hop over the fence.
Here i am with flat wet hair & scarf, The Duke of Edinburgh an arms length away, just moments after the Queen passed me, thanks UK Daily Mail!! 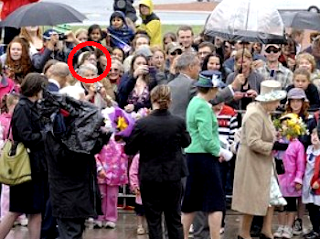 I lined up an hour before she was due to arrive at the War Memorial & pow, straight in the second row, front & centre to the stairs, behind one little 5' tall elderly lady.  Whether you are a monarchist or a republican, you have to respect this particular monarch, she's simply awesome.  I was surrounded by British tourists who said they'd NEVER get this close to her at home.  The atmosphere was electric.
You know she's coming when this flag is flying . . . 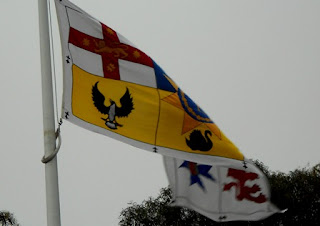 I'm a fan of General Peter Cosgrove retired, the director of the War Memorial.  He came over to tell us that the Queen would be arriving shortly & going straight inside, but . . . would then be coming out & walking along side us.  FYI that is not his pretty-ruffled-cream-umbrella, it's the lady in front of me.  Gorgeous, non?? 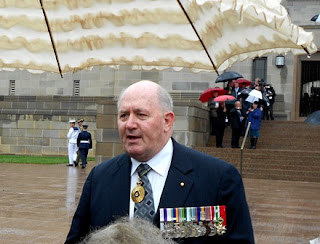 I was directly on the other side of the car . . . i saw this on the news when i got home. 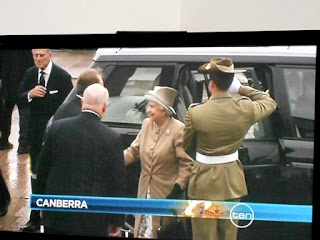 Apparently she had a little trip up this step but brushed it off & powered on. 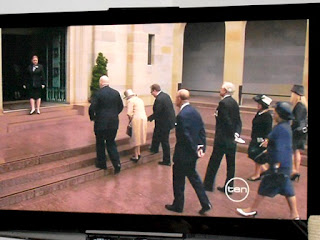 I took my proper camera - the Nikon D70 SLR & didn't use/ need the enormous phallic lens, all pictures were taken with the regular one.  I didn't want to stuff up the camera (my lens changing skills are limited + it was raining) when i knew she'd be coming so close. 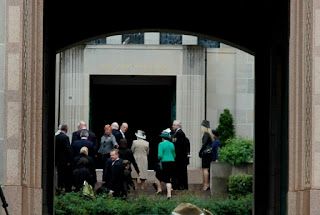 Here she is inside the War Memorial, looking at pictures of herself from over 50 years ago.  She is still so beautiful, aged 85.  How 'bout the Duke at 90??!! 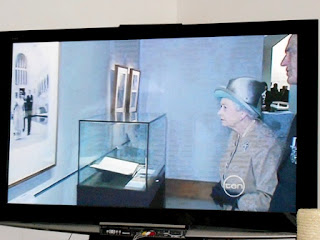 Check out my amazing vantage point.  The only thing i could have done better was bring a milk crate to stand on, or my tall husband & get me that fabulous man (in the grey suit) who followed the Queen around with a see-through umbrella!!  Sweet Julie from Mama of 2 Boys blog said my photos were better than The Woman's Weekly!!  Yay, thanks Jules.  I'm 'the people's photographer'. 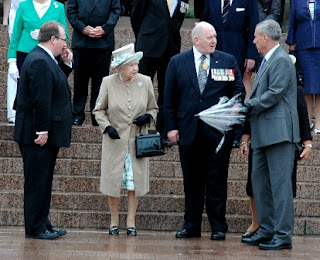 The engaging lady in jade is her Lady In Waiting.  The Queen passes all the flowers & gifts to her . . . 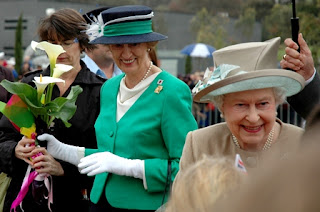 who relays them to this guy, who fills up the convoy of cars with the flowers, which are normally shared around local hospitals & nursing homes. 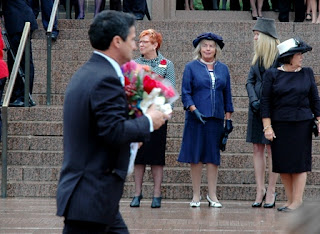 I had time to dash down to view the motorcade leaving too.  Prince Phillip waved to me.  Such a shame it rained, Canberra is Australia's sunniest city with little rainfall.  It did suit the mood of this particular engagement as she was laying a wreath at the Tomb of the Unknown Soldier, viewing the Afghanistan exhibition & the names of the 29 soldiers who have been killed there.  I was thinking of my husband, in Afghanistan right now, the whole day.  I quickly emailed him the best photos & then he called me, super jealous but SO happy for me.  I love you handsome soldier, i'm so proud of you!! 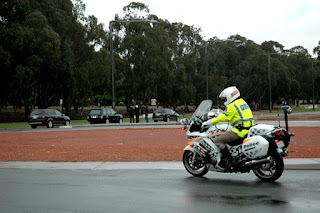 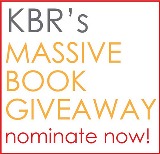 Labels: Afghanistan, Afghanistan Exhibition, handsome soldier, Her Majesty The Queen, The Queen at the Australian War Memorial, The Queen in Canberra

What an awesome day!

Now that is a once in a lifetime experience!

I would have to agree that your images are some of the best that I've seen and I just love your enthusiasm, it fairly sparkles out of the screen.

Biggest of happy hugs to you Lovely.
Here's to a weekend of laughter, glamping and all that's good in the world.

Love it!!
I still remember the day I spoke to Lady Di - thought I'd died and gone to heaven :-)
Hope the weekend is fabulous

ha! for a minute there I thought were were writing from London?!
x

Love it - you should be a Royal Correspondent for one of the women's mags!! Now here's a question, why doesn't Kate have a Lady In Waiting? Has it gone totally out of favour these days? xx

Sounds like you had a fantastic day & I agree your pics are better than the any mag. KP

the peoples photographer!!
Love this post - I can feel the words tripping off your tongue in excitement. Also loving that frilly umbrella.

The Queen does indeed look amazing for 85, and always looks so well turned out!
fee x

I love your excitement and enthusiasm - it's infectious.
:-)

Damn it Jennie, your last two lines made me cry!

But you made me giggle at being the people photographer!

Wowee! What an experience! I can feel your excitement!

How sweet! I was just thinking the other day how much the world has changed since my school class was rounded up to go see the Queen wave her way around a racecourse on a visit in the 80s, I got some photos then on my tiny camera, but they were from a bit further away :)

my hubby and I talked about this and how people that had met her when they were younger had some fond memories and were excited for the opportunity to see her again. My daughter (5) loves Kate and wills. Their wedding was a highlight. I'd definitely take her in to see them if / when they come to Australia one day, some may scoff but I think it's important to give our children the opportunity to have such fond memories too. Glad you had a good experience.

What wonderful memories for you Miss Posie - even making the UK press! I can still remember vividly my parents taking us kids to line up for hours during her first visit. I was well worth the wait then and it still is today.

Oh, what an amazing experience for you, the photos really capture the moments, and the best part is you'll have those memories forever.:)Sam

You make me chuckle xx

How very exciting! I would have been tickled pink to be there x

You are too funny Posie! Glad you got to be up close and personal. Queenly hugs, Margie

This blog is a really gracious one. Tender thanks for share ining such great facts out. Ill deff be cruising by more frequently so i an take in whats great!

How fabulous...what an amazing experience for you all!
x
Melissah