raising children through a challenging age

Greetings all,
Our eldest is at that challenging age between primary school & high school, sitting at the children's table but wanting to join in adult conversation, up & down moods . . . that almost teenage stage.  She's a beautiful girl, bright, happy, healthy, sporty, popular, house captain, variety of interests, loving & she's really excited about high school (eventhough she's going from a school with 16 girls in her year 6 group, to a whopping 200 girls in year 7!!) 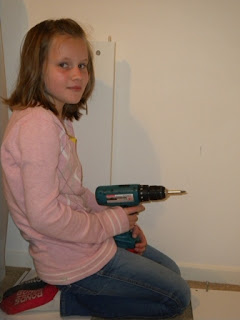 I put Saturday aside to spend with our lovely big girl.  We planned to put the IKEA book case for her room together then go to the Murrumbateman Field Day with a boy-friend from school (who lives locally) & then collect the twins who were at a sleepover in Murrumbateman too.  FYI Murrumbateman is between Canberra & Yass on the Barton Highway, if you were leaving Canberra to head to Melbourne.
We had fun in the mud, she rode the dodgem cars, a BBQ lunch, afternoon tea from the church marquee, we played with sheep, watched a snake show . . . i took great shots . . . anyone else only able to upload one image to their post today?? Come on Blogger, you're messing with my head!!
Anyway, after the declaration i had yelled at me earlier in the week of "what would you know what it's like to be the eldest, you & daddy are both the babies of your families, you were never the first to do anything, it's all so hard" & subsequent tears, it was good timing to devote a day together.  I had a nice chat to her about the fact, she might be the eldest but we're first time parents to an 11y.o. & we're all learning as we go.  Her attitude at times shocks us, then there are unexpected cuddles.  If any of this slow build up to her outburst has shown me - being a stay at home mother to this age - you just have to be there, when they are ready, when they want to talk, when you realise they have followed you around the house making small talk as there is something much bigger on their mind.  You can't ask or push, you have to let them get it out, in their time, it's slow motion, but you're on egg shells.  My husband & i have developed hand signals for when to avoid & when to act.  While we don't let her be disrespectful, we give her space & let her know we're here when she needs us.  She was a frustrated toddler & this is no different, 10 years later, eventhough she has the words to express how she feels, it's all so new & world ending.  Mercifully she's not dramatic & doesn't have narky friends, she chooses sport over gossip so we hope it's a smooth-ish ride.You think you've done a lot of work raising them to school age, OMG, there is so much ahead of you!!  Any teenage daughter survivors out there, do tell, i'd like to go in with my eyes wide open.  We have lots of teenage nieces but it's different when it's your own!!  Have a lovely week, love Posie

Oh...my daughter is 4 (going on 18)...it's too late to put her back where she came from right?? I am soooooo not looking forward to her teenage years!!

Oh, I have just this scenario looming around the corner (nine-year-old), and I can see the teenage angst building every day.

This was very helpful. I think I may have to work on some parental hand signals.

Your blog is such an insight, I've been lurking for ages reading all these excellent things you post! Thanks so much for sharing your thoughts, they are really great for those of us thinking about starting a family and those with young kidlets already. Awesome stuff lady :)
x

I don't think it is just related to girls as my 8 yr old son sometimes shows those traits! I agree as long as they're not rude best to just wait it out. We can always distract Finn with sport :) As a eldest child myself I can relate to the pressure and expectations felt, but I think we put it on ourselves! Great post, loving learning more about your family xx

The car !!! My kids always told me more from the back seat of the car - they don't have to lookat you and they just blab on... (it sounds weirder than it is I promise)

I'm living through the feisty teenage daughter years as we speak!!!!... happy to answer any questions, but I'm sure my "what to do's" and "what not to do's" would fill more than a little blogger comment box!

Oh, Posie, thanks for leading the vanguard, you brave lady, and shining a light on the way ahead for us. I can't imagine what it will be like to have the three pixies all as tweens. Gasp. I do love your hand signals, too - I'll mention them to Mr PB. Maybe you could do a post showing them while Mr PB is there to hold the camera (you'll have to do it when the children are in bed or you'll be sprung). J x

A Spoonful Of Sugar said...

Sounds like you had the perfect day out! Spending time with your kids and getting to know their friends is what I try to do. I found things got easier at high school when they were mixing with a bigger group of kids.

As you know I am nowhere near this stage. I (vaguely) remember it from when I was a girl though. There's so much going on and you are so torn. Your insight into this is marvellous and I think you, your soldier and your hand signals will do just fine (I smiled thinking about you two doing hand signals!) MM x

I so, so know that what's happening around here at the moment is a Walk in the Park. I reckon I started dreading the teen rollercoaster thing six months into the first pregnancy. Breathe calmly and hold onto your hat, Mum!

Being the eldest is hard. (Guess what I am?)

As for raising teenagers... NO clue. I was a high school teacher for many years though and I really think the key is listening without judgement. The world is a very different place to the one we knew at the same age so there will be times when they very well might know best. Be open to that possibility.

It's not so awful most of the time...my 15 y.o just realized she's been missing out on the rebellious bit and is giving it to us full throttle lately. My 13 y.o. son has been at it since his 2nd birthday, and my 11 y.o. son is following in his footsteps. Still they're all worth keeping at the end of the day...

My girl is almost 13 going on 18 at times and is sometimes 5 ! Life is very interesting at times , lol !

Sounds like you had a great day - not looking forward to the teenage years - will be knocking on your door for advise (or maybe I should just pack her up and send her to your farm:)

Blogger has been funny for a few days - you can add more - just have to go back in and do it one at a time.

Queen Of The Armchair aka Dzintra Stitcheries said...

Hi Jennie...I know exactly what you are all going through, been there done that...Trust me, you will come through it. Setting aside a day for your gorgeous gal is perfect...days like this are sooo very special to you both!!! Love, Dzintra♥x

I love the hand signal idea. Must try!

Hold on to your hats - parenting teenagers is hard! There will be times when you wonder where your sweet little girl has gone but just keep making time for her and it will make the road a little less bumpy. x

Posie everything that you have mentioned about your daughter is what is going on here with my girl who just turned 11. I feel that it's harder when they are older than when they were younger sometimes. Overall things aren't too bad, lots of talking and explaining, trying to listen, slowly getting there but I have to say I'm finding it hard to say goodbye to my little girl and say hello to a much older girl. Having some one on one time though sounds perfect. Have a great week. xo

It really sounds like you're doing a fantastic job! Your daughter actually sounds a lot like our 9 yr old boy, feeling the preassure of being the oldest, the way he follows me around making small talk, thanks for the heads up there! He's a deep thinking & very sensitive little fella, I do worry about how to make sure we do it all just right...as I sit here my 3 (almost 4) yr old is thowing a wopping tantrum because her refuses to ask me to help him with his cape! Oh, the trials & joys of parenting...

Oh my...gee this sounds so familiar to me;) Our eldest is 14 years old and had always been such a quiet, even tempered little blossom...so the first time we had a slammed door, I think I cried for a week!! You sound like you are doing everything you need to do. Remember to be easy on yourself and your sweet girl. It certainly is a new life adventure, that is for sure (for everyone). Just remember that you have the power to decide which way to go...they are still finding their way in the world. I have learnt to hold my tongue, and the occasional 'How are you goin' sweetie' never goes astray:) Oh and the more up to date you are with obscure rock bands....scores you heaps of brownie points;P I wish you luck and email anytime if you need to unload ;) Hugs ~ Tina x